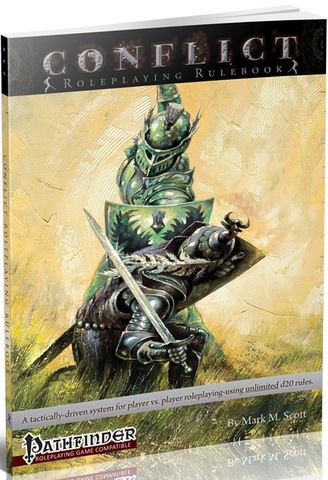 Most RPGs involve groups of players pitted against a challenge orchestrated by a GM, but there are times when that guy on the other side of the game table… man, you just want to slap the overconfident grin off his stupid mug. If you want player vs player competition—if you’re looking to provide your players with a chess match that pits their wits against real-world prey—you want the Conflict Roleplaying Rulebook!

This system is fully compatible with the Pathfinder Roleplaying Game Core Rulebook.

This RPG system is uniquely designed for competitive, team vs. team roleplaying which includes:
Passcards—Double-sided 8x11 templates to adjudicate player character’s hidden movements and actions.
Pre-generated characters and teams for immediate play with easy-to-modify stat blocks for each character.
The Battlepoint System—A simple calculation for ensuring game balance among characters and levels.
Match Types—Different objectives, challenges or scenarios that make each match surprisingly unique.
Map Elements—Magical devices that you place before the match to hinder opposing teams or enhance your own teammates.
Conflict Laws—Universal rules that dictate character environmental handicaps, player interactions and classes.
Team Feats—New Feats that grant bonus and special abilities to teammates when they compete together.
A list of enemy taunts and battlecries. Handy combat charts for easy reference and even a list of funny team names for your group.

For more information on how to play Conflict Roleplaying visit www.ConflictRPG.com