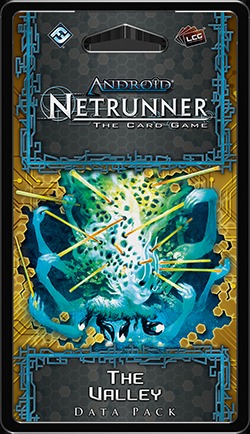 Fantasy Flight Games is proud to announce the upcoming release of The Valley, the first Data Pack in the SanSan Cycle for Android: Netrunner! As it boots up the SanSan Cycle, The Valley transports players deep into the heart of SanSan, the number one place for all the top tech. This American megacity sprawls along the California coastline from San Diego in the south to San Francisco in the north. There, you’ll also find Biotech Valley, most often called just “the Valley,” home to the world’s biggest biotech firms and its most advanced genomic research. Home, additionally, to Jinteki Corporation’s flagship American R&D facility, the J-Plex. With its sixty cards (a complete playset of twenty-two different cards), The Valley explores Biotech Valley and its massive investment into bleeding-edge bioengineering. This is a meatspace heavily colored by genengineering, a highly educated workforce, tech startups, capital investments, and the presence of Jinteki’s J-Plex. You’ll find numerous assets, region ugrades, genetic resources, and a new Jinteki identity. Of course, even in the Valley, you’ll need more than good genes to get by; you’ll also find new programs, ice, and currents for both Corps and Runners.